The homeless have finally found a home. Due to the renovation at Beverly Hills High School, the Advanced Dance Theater Group, the Company 2001 has found its home at the Robert Frost Auditorium of Culver City High School. They will perform their annual concert on January 10, 11, 12, and 13 at 7:30 p.m. This amazing group of dancers, "The Company," is one of the top high school dance groups in the country. The Company has produced many dancers that have gone on to dance in television, films, and music videos, as well as professional dance companies such as Winifred Harris, Naomi Goldberg, Bella Lewitzky, and ISO. This year's performance can be described as an eclectic mix of choreography ranging from traditional West-African to tap, from hip-hop to ballet.

Following the tradition of including alumni choreographers, Rachael Robbins has returned to choreograph a piece that features the excitement of a dance club, incorporating techno music and contemporary dance movement.

Artistic Director Janet Roston has drawn on her Nashville experience to choreograph a wry cowboy-inspired piece using the men of the senior class. "We have a fantastic group of senior boys and I wanted to create something special for them."

This year's guest choreographer is London-based Ben Wright. Ben portrayed the prince in Matthew Bourne's landmark production of "Swan Lake" at the Ahmanson Theater in Los Angeles and on Broadway.

Students are very involved as choreographers for the concert. Senior Adam Scher, a member of The Company since his freshman year, has choreographed a piece that shows three different perspectives and interpretations of love. Newcomer to The Company, student Schuyler Sorosky, has jumped right in to the excitement of creating choreography. Her piece utilizes a mix of tap and pedestrian movement that will captivate audiences. Other student choreographers are Aaron Harvey, Laura Karlin, Oren Kashanian, and Mike Wells.

(Click on the Company Photos for Full Size Images) 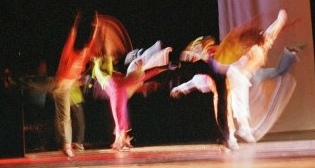 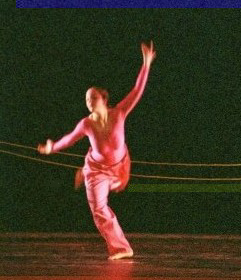 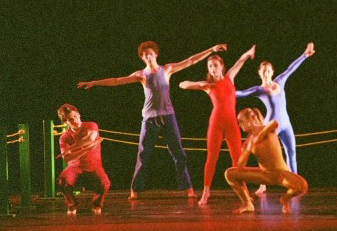 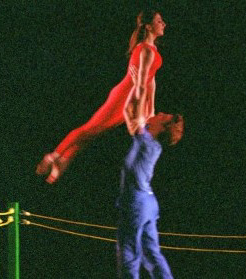 Thanks to my dancers for their contributions and to all those who wait in the wings for their cues. 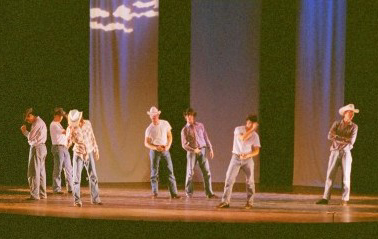 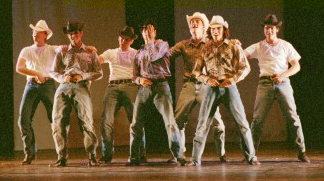 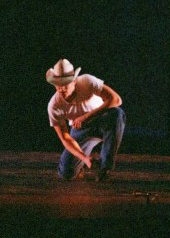 lyle made me do it
Choreography: JANET ROSTON
Music: LYLE LOVETT
Dancers: Quartet: JOSHUA FARAHNIK    ADAM SCHER    OREN KASHANIAN    MIKE WELLS
Solo: JESSE MACHT
Septet:  5 dancers above and NOAH PIVKO, RYAN COOPER
For the Senior Boys: As you ride down the winding road of life may all your sunsets be glorious. 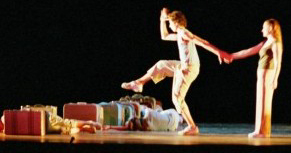 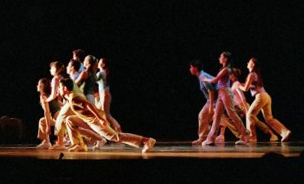 Choreographerís note: I came to Beverly faced with an exciting challenge: a limited amount of time to create this new work, and the largest amount of dancers I have ever used in one piece. I consider this dance to be an ensemble work about heading together in one direction, sometimes with certainty and at other times with query. Behovely is in some ways a work in progress, the result of only eight days work. It strives to highlight differences between performers as they appear on stage. I would sincerely like to thank Janet Roston for inviting me to create a work for this inspirational company. 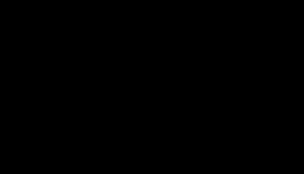 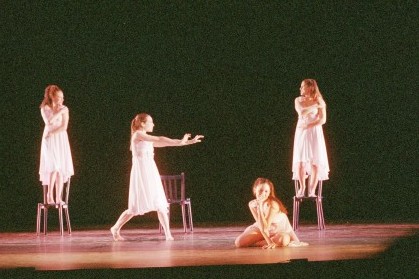 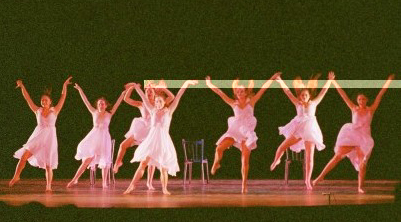 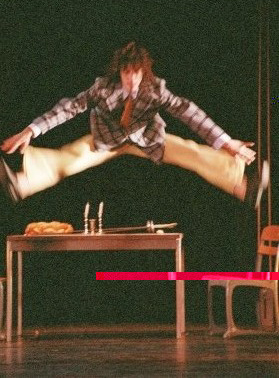 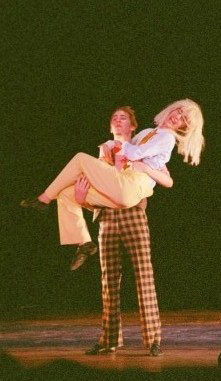 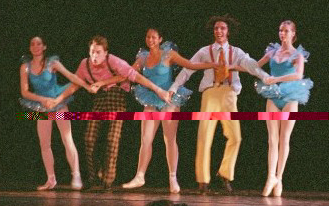 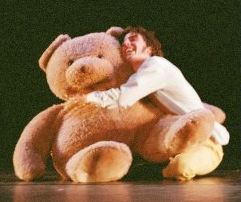 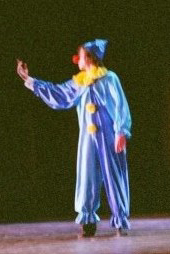 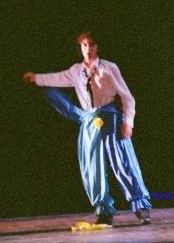 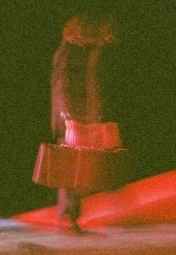 one day at a time
Choreography: OREN KASHANIAN
Music: STEPHEN SONDHEIM
Dancer:  OREN KASHANIAN
Dedicated to all parents and all those who truly love me. 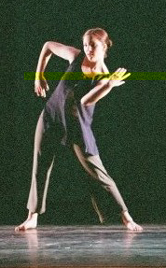 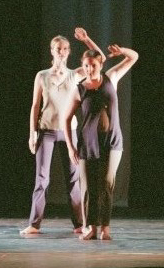 i wrote it down somewhere
Whoeverís in charge up there had better take the elevator down and put more than change in our cup or else we are coming up.
Choreography: LAURA KARLIN
Music: ANI DIFRANCO
Dancers: LAURA KARLIN    GABRIELLA VALLONE 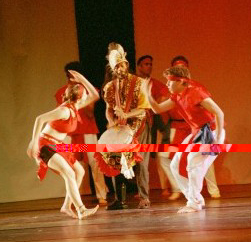 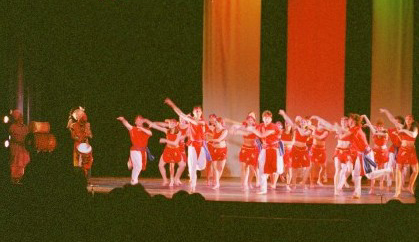 Choreographerís Note: Manjiani is one of the most popular and spirited dances of West Africa. It originated in the Ancient Old Mali Empire. Its folklore is expressed through the Barbar ethnic groups that settled in Senegal, Guinea, Gambia and the Ivory Coast. Manjianiis a ceremonial dance performed after initiation (rites of passage). The young people have returned to their families and friends with exuberance and joy, anxious to begin their next phase of life, becoming an adult.

London-based Ben Wright began dancing at 19 years old, training at the Ballet Rambert School. He joined London Contemporary Dance Theater where he worked with Mark Morris, Nir Bengal and Anjelin Prejlocaj. In 1995 Ben created the role of the Prince in Matthew Bourneís ground breaking production of Swan Lake for Adventures in Motion Pictures. He performed the role throughout the UK, in Londonís West End, in Los Angeles at the Ahmanson Theatre, and on Broadway. Ben was also seen in AMPís production of Cinderellain Los Angeles and the West End. In 1997 he performed for Her Majesty the Queen at the Royal Variety Performance.He presently works for Londonís Ricochet Dance Company. As a choreographer he has created work for the London Contemporary Dance School, the Richard Alston dance Company, 4d, Dame Allenís Newcastle Performance Group, and England's premier boys Youth Group Positive Action.

Nzingha Camara trained with Les Ballet Africans National Dance Company in Guinea, West Africa. She is the Artistic Director and Principal Dancer with her company, Le Ballet de Kouman Kele West African Dance Ensemble. She was selected as a Master Artist by the City of Los Angeles Cultural Affairs Department and currently teaches West African Dance at UCLA and Santa Monica College. Her motion picture credits include King Kong, Roots II, The Color Purple and Poetic Justice. Among her television credits are The American Music Awards, Motown 30, and A Different World.Her work has been seen in Grand Performance for Mr. Nelson Mandelaat the LA Coliseum and Dionne Warwickís Annual AIDS Benefitat the Universal Amphitheater and with Jazz Antiqua Music and Dance Ensemble.

Janet Porres is completing her BFA in dance at California State University Long Beach. At CSULB she worked with choreographers such as Winifred Harris, Walter Kennedy, Jeff Slayton, and Keith Johnson. She performed as a featured dancer in The Envelopechoreographed by David Parsons. Janet she received the Gloria Newman Memorial Scholarship in Dance for the past two years. Her choreography has been selected several times to be a part of the Contemporary Concert at CSULB. Janet was a member of The Company for four years from 1994 to 1997. Her senior year she received the Outstanding Senior Dance Award.

Janet Roston has worked as a choreographer in a wide variety of media including numerous commercials (many for Disney and Barbie); corporate shows, (Sunkist, Polaroid); and television (Ned and Stacey,A League of Their Own). Theater choreography includes Avenue Xat the Odyssey Theater for which she received a Drama-Logue Award; A... My Name is Aliceand Bed and Sofaat the Long Beach Center Theater; and Nite-club Confidentialat the Tiffany Theater which won the LA Weekly Award for Outstanding Musical Production. Her work can currently be seen in the 20th Anniversary production of Tracers at the Odyssey Theater. Janet produced and directed the instructional video Principles of Choreographywhich won medals at the Houston, Columbus, and New York Film Festivals.

This yearís choreography, Lyle Made Me Do It, for the Company 2001 is inspired by her work staging Nashville recording artists Lonestar. It joins the repertory of Kin Dance Company and will be presented at the California Plaza this summer. She has directed the The Advanced Dance Theater Group for 20 years.

Rachael Robbins received her BFA in dance from California State University Long Beach, where she performed in works by Martha Grahm, Lar Lubavitch, Janet Eilber, Jeff Slayton and Keith Johnson. In 1996 she received the Fine Art Affiliate Scholarship for her solo Enfold Me In Your Wings. She is currently a member of Naomi Goldbergís Los Angeles Modern Dance and Ballet and of the Keshet Chaim Dance Ensemble with whom her choreography was performed in Moscow. She also works professionally as a lighting designer and stage manager. Rachael was a member of The Company from 1991 to 1993, has returned as Assistant Artistic for four years and has twice been Alumni Choreographer.

Debi White is currently a senior majoring in dance in the World Arts and Cultures Department at UCLA. She recently attended the 8th Festival of Pacific Arts in New Caledonia where she shot a documentary of the event for UCLA archives. She performed in Jazz Dance LA in 1996 and 1997 and last year danced for the UCLA presentation of Nzingha Camaraís MA GBA GBE (Donít Forget). Debi was a scholarship dancer at Dupree Dance Academy and is currently on full scholarship at Debbie Reynolds Dance Center. For the past two years Debi along with Bradford Robinson-Matthews have created choreography for The Companyís AP Posse.